I know what you are thinking. Whaaaaat? Why so many blog posts lately? I told you--I'm trying to do more than just Really Random. :)

So, as promised, here is the latest WIP (work in progress) update.

For the last two Monday afternoons, I have been taking a zoom class from the oh so fabulous Tara Faughnan. It is an updated version of the classic Double Wedding Ring quilt pattern. 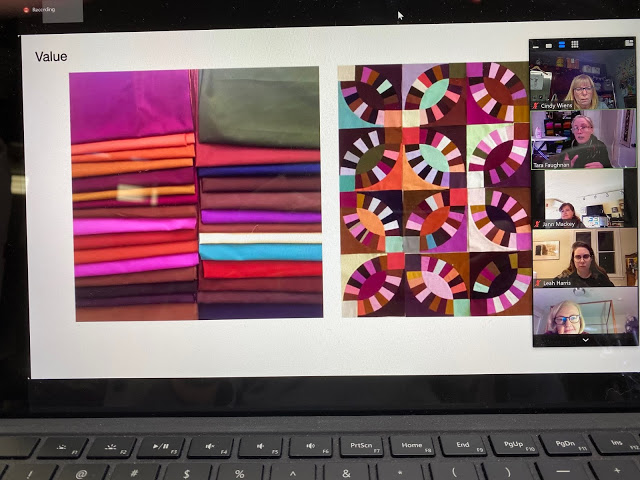 Before I launch into the update, along with the newly chosen name for this particular project, let me give you the back story. Hmmm. I seem to be big on "back stories" lately, as evidenced by my two recent posts about the Quilts and Classics calendar.

Years ago (maybe over 15?), I took a class called Hidden Wells, a pattern written by Mary Ellen Hopkins. I chose a focus fabric by Paula Nadelstern and built the rest of the color story from there. 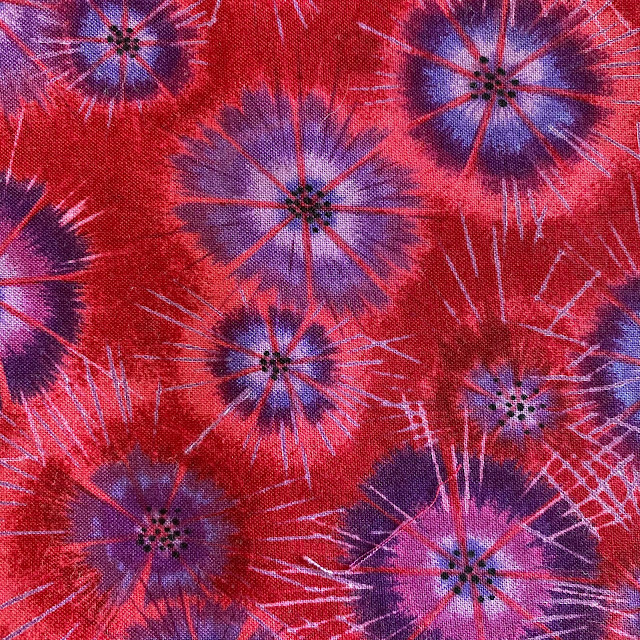 My original thought was that the quilt top would be for my brother and sister-in-law. My sister-in-law is from Taiwan and for some reason I thought she would like a purple and red quilt. Who wouldn't, right??

The fabric choice went in a weird direction and the blocks ended up looking like this. Way different than I had originally visualized in my head, and because of that, I hated this quilt top. (Sorry for the poor quality photo--it's the only one I have.) 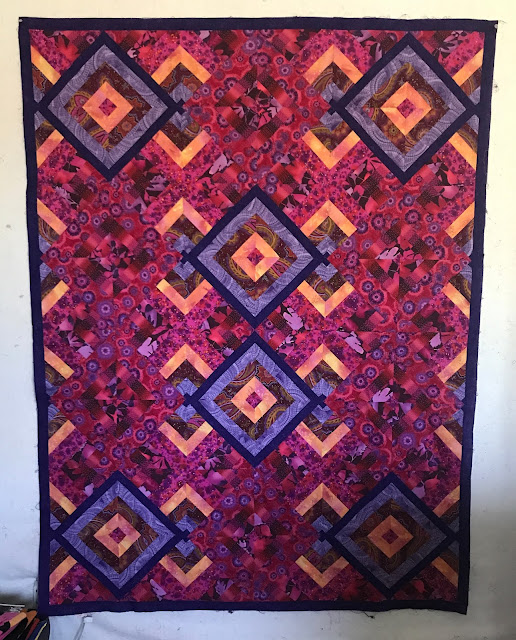 It sat in a drawer for years because I planned on making a braided border on all four sides. Have you ever made a braided border? They take forEVER. I made enough for one side and called it quits. But at this point, I'll still convinced that I can finish it. 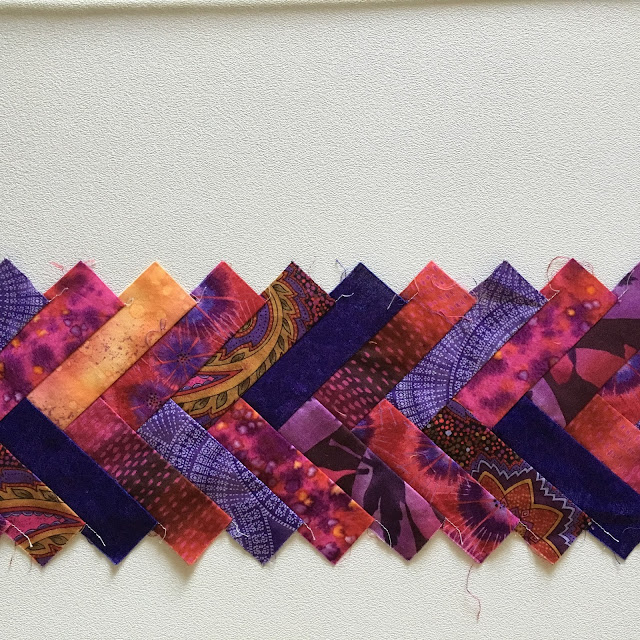 I never got it out again except to shoot a cute picture of snapdragons. 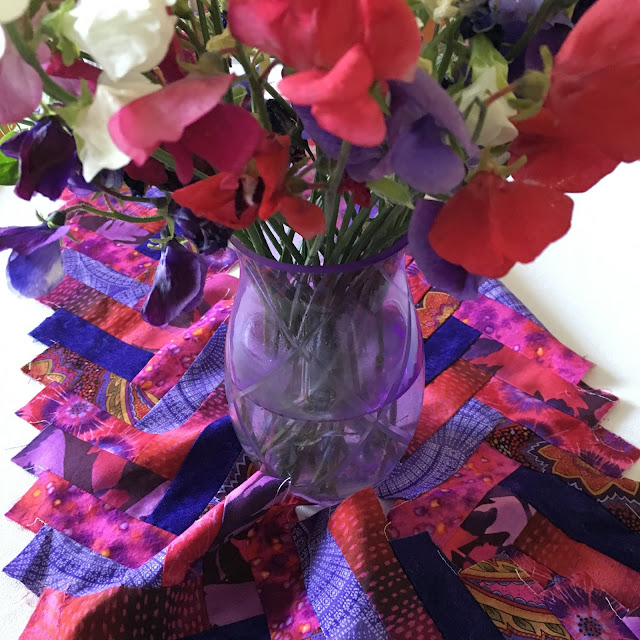 After Victoria Findlay Wolfe published her book on double wedding ring quilts, I woke up one day with the brainiac idea of chopping the whole thing apart. It seemed like a fantastic idea at the time. I had long ago given up the idea of giving it to my brother and sister-in-law. I had never told them about it in the first place, so they didn't know what they were missing. Haha...

(Please tell me your design wall is covered with random threads, too....) 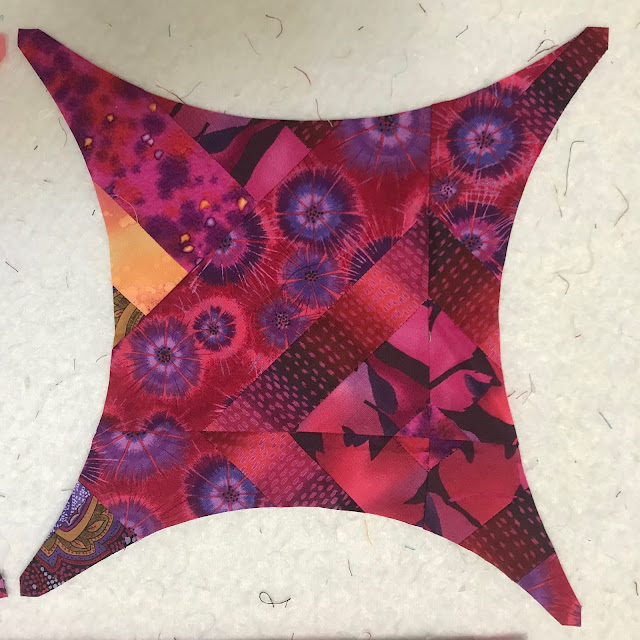 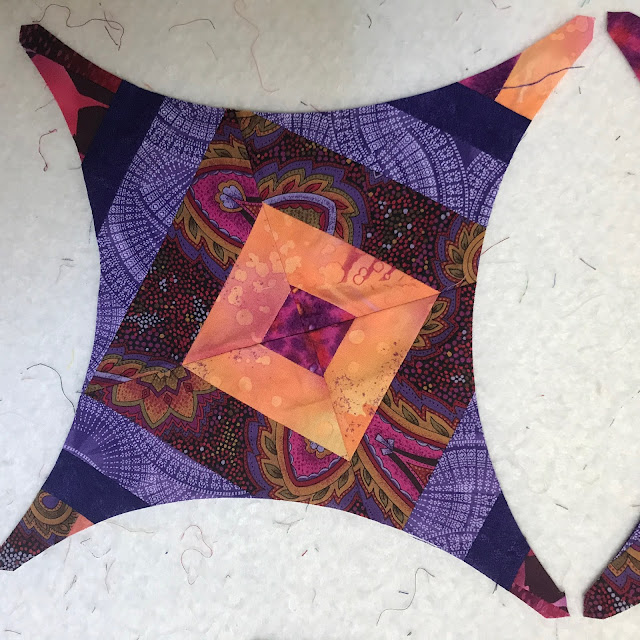 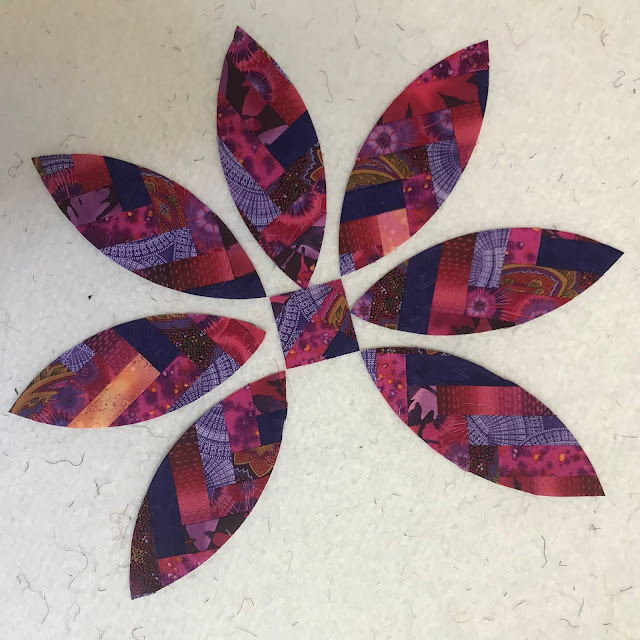 Then came the Humpty Dumpty part of the process--putting it back together again. 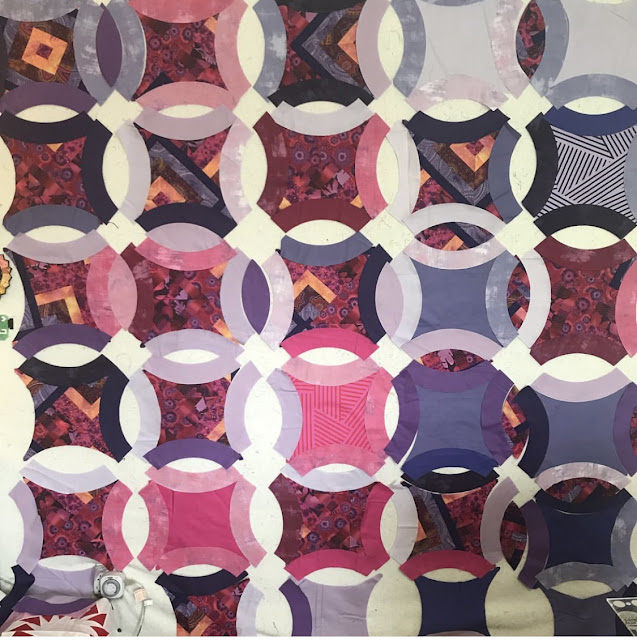 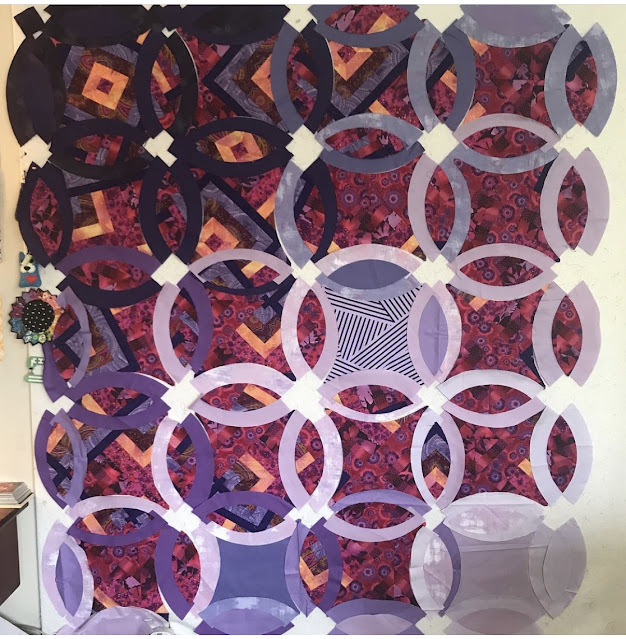 I called in creative help. 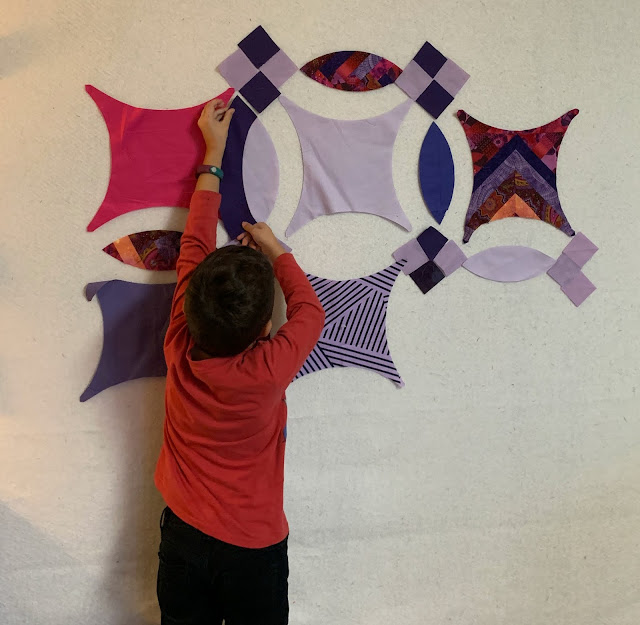 Gabe got this far, and then even he gave up. 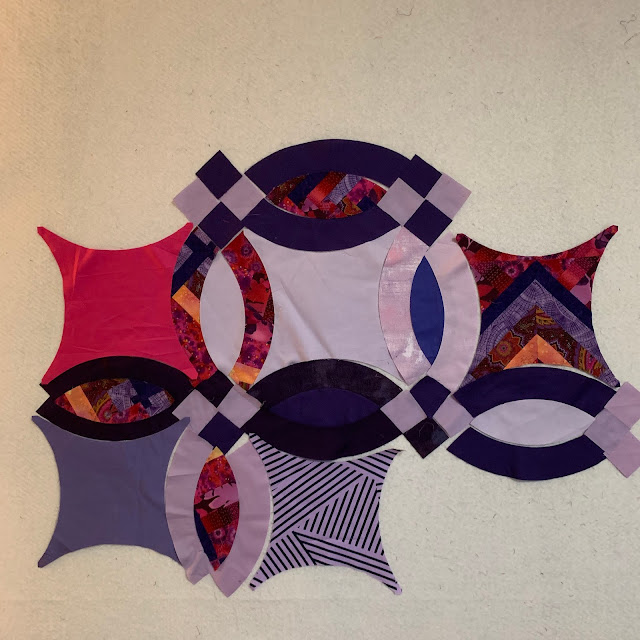 Back in the bin it went.

I have come so close to tossing the whole thing every time I do a sewing room cleanup, but I've just never been able to give up on it, hoping that someday there would be a lightbulb moment.

And then I signed up for the class with Tara.

At first I got out my bin of solid fabrics and was going to mimic her phenomenal double wedding ring. But then a light did indeed go off in my head and I thought maybe I should pull out that bin of "parts" and see if they could be salvaged into something.

This was my inspiration, both in terms of design and colors. (Side note: I highly recommend following Tara, and also following this tag if you are interested in double wedding ring quilts based on her designs.) 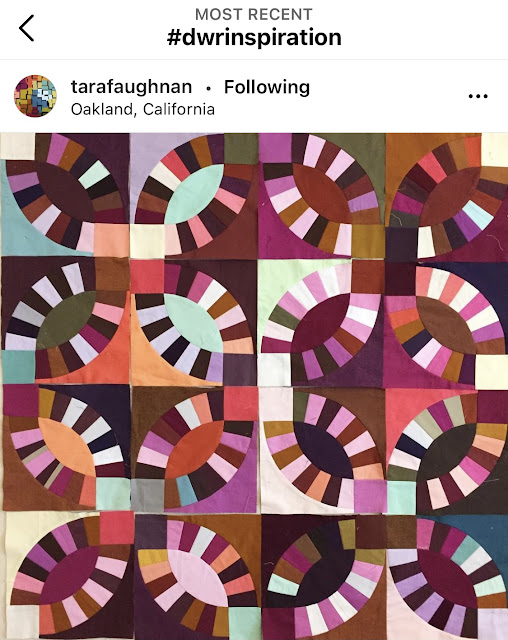 I began cutting up fabric for the pieced "arcs." 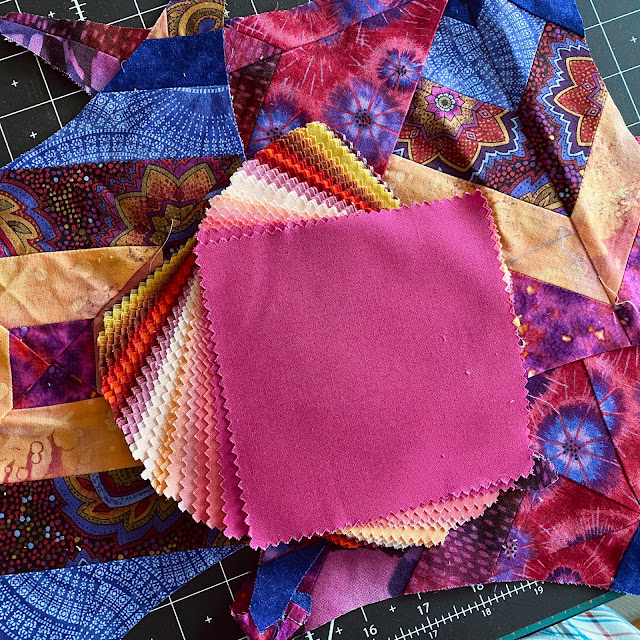 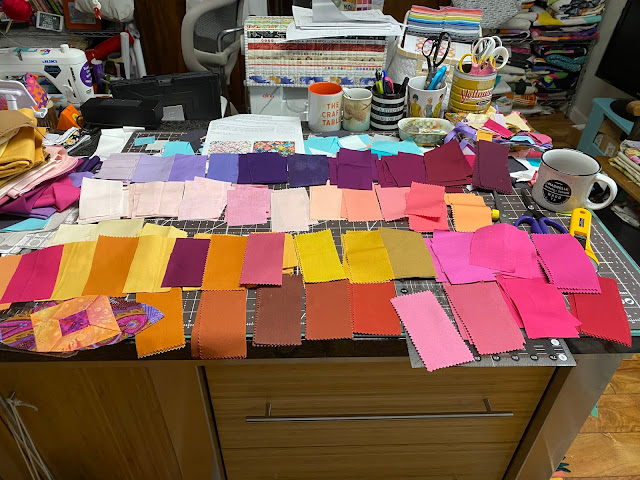 My first idea was to use some of the chopped up fabric in the "melon" portion. 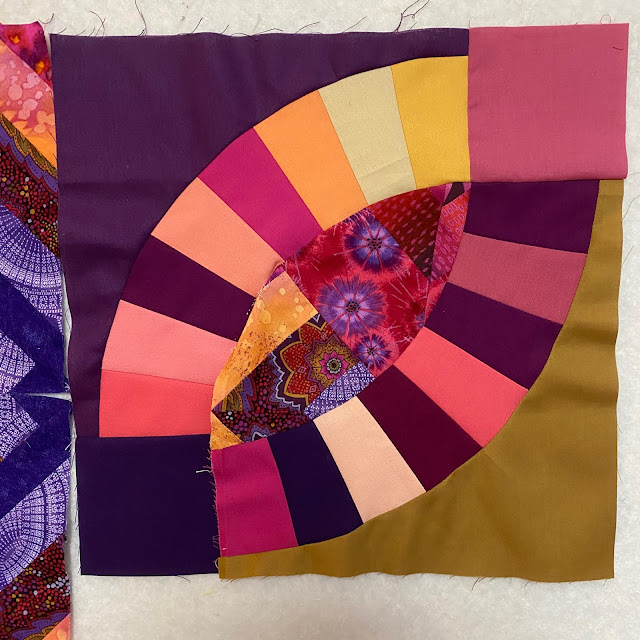 I soon realized that wasn't a good idea. For one thing, curved piecing, which is tricky enough. For another thing, the melons had seams going all different directions. So here I was, trying to sew curves together, working with bias edges, and then having the seams from the pieced fabric fighting me at every intersection.
So where am I at this point?
The quilt top will be made using all solids. I love the colors I'm putting together so far. 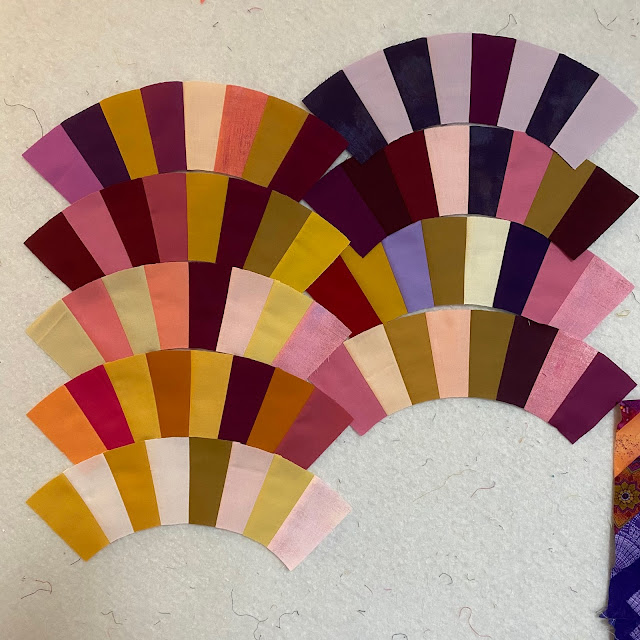 These four intact blocks, which were left over when making the original quilt top, will go on the back. 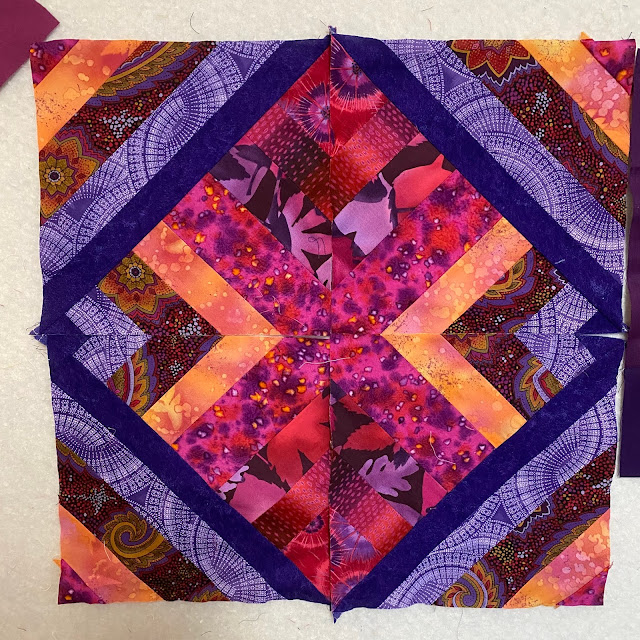 I will square up some of these units and sew them together, and they will be part of the back as well. 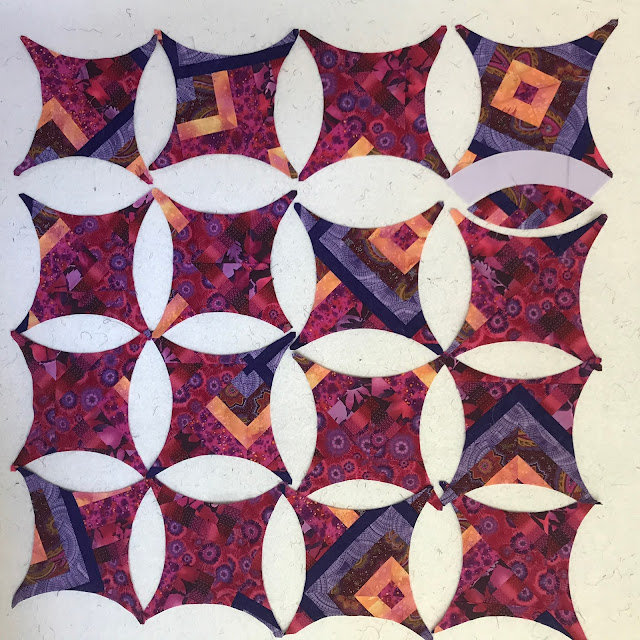 So maybe, as they say, the third time's a charm. Tara has commended me for trying so hard to make this work, so there's that. :)
And in the midst of class the other day, I came up with the name for this double wedding ring quilt: Broken Engagement.
Posted by Live a Colorful Life at 2/03/2021