The letter this week was written by a farmer's wife in Prince Georges County, Maryland. She begins her letter with the idea that her daughter, married to a farmer, "would be the real center of her home, the real partner of her husband--and each would be so happily busy in their little world that love triangles and divorce mills would have small chance at them." Like the writer of the letter before this one, she placed emphasis on education. "Her leisure (she really will have more than the city dweller might suppose) will be spent in delightful companionship with good books and magazines her education will have taught her to appreciate." 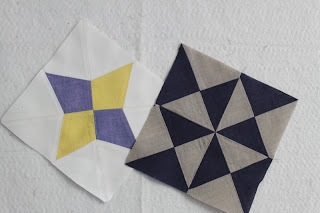 This, writer, I believe, had a deep and abiding faith in God and in His creation. "When her heart can sing with the morning stars at the first stirrings of the new creation in spring and from that learn to go about her commonplace, homely tasks with still deeper joy over the faint fluttering of a new creation beneath her own heart, she will feel that heaven itself could not be a better place in which to live."

This writer valued the great breadth of creation from the vast stars above to the smallest seedling.

#6, Big Dipper. The colors were chosen based on silvery twinkling stars set against a background of a deep blue night sky. 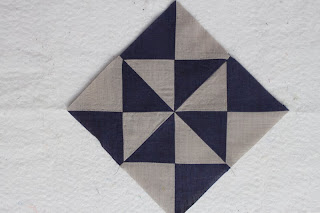 #66, Periwinkle. I double checked on the color of a periwinkle flower, also known as vinca minor. There is a tiny bit of yellow and white at the throat. 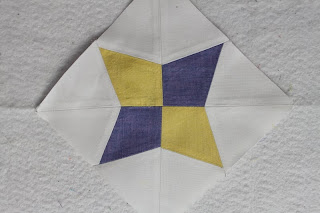 This week I felt like I finally had an "easy" block to make. No templates. Simple half-square triangles. But did that stop me from messing it up? Um, no. Color choice, check. Cutting, check. Sewing, not so much. Oops. 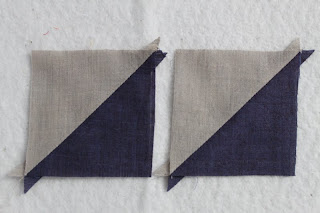 As much as I love my new seam ripper, I decided the solution was simply to cut more half-square triangles and try the sewing part again. 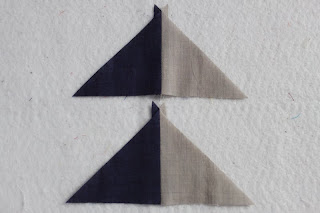 Thus far I have always photographed all the blocks on point. The blocks sure look a lot different with a straight set. I put them on the design wall in the order they were made.When the time comes to sew the whole top together, they will be completely mixed up.But I'm sure happy with the way they all look together. 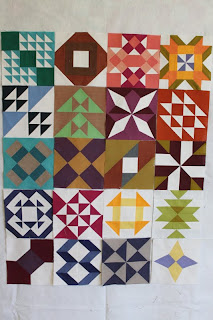 Since Periwinkle was one of the blocks this week, I thought I'd throw in a little picture of what Mark calls our "storage shed." It's clearly more than a storage shed. It kind of irritated him at first that I put a sign on the porch of the storage shed, especially a name as girly as Periwinkle Cottage! You'd think by now he would be used to my penchant for naming things. But if you ask him about it, he'll admit that he is glad
we chose to add a porch to something as utilitarian as a place used to store out-of-season "stuff." And he's gotten used to Periwinkle Cottage. Either that, or he's made the wise decision to just go with the name. Yeah, that's probably it. 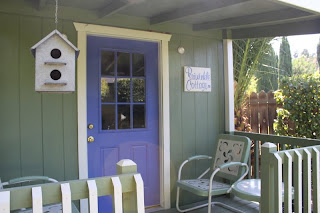 As always, Carla has some great thoughts on this letter and you won't want to miss her blocks.
Posted by Live a Colorful Life at 8/12/2011