The writer of this week's letter is from Clay County, Mississippi, a southern farmer's wife. She was not only a farmer's wife, but grew up as a farmer's daughter. "I have no hesitancy in saying that I wish my daughter to marry a farmer." She has money to spend every week, from selling butter and eggs. And "from a physical standpoint, nothing can be more invigorating than the daily exercise in the open air..."

A recurring theme I have found interesting is that these women find joy in the daily tasks around the farm, giving them a sense of accomplishment. And like others before her, this farmer's wife is happy  to be "...surrounded by God's sweet and wholesome air and the beauty of His world."

This week's blocks were a breeze to construct compared to last week's Night&Day.

I have always liked the color of orange marmalade cats--is that a real color? I don't know--I don't have cats. I should have maybe switched the colors around because it looks like there are more mice than cats in this block. 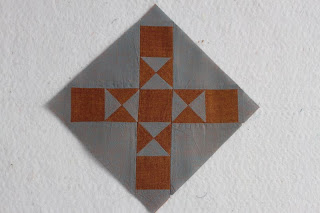 I really like the star design in this block.

Next is #107, Windblown Square. Mark and I spent the first five years of our married life in western Kansas. Believe me. I know "windblown"!! The wind was oppressively present every.single.day! Sometimes when a storm was brewing the sky would get really dark, but it would have this kind of odd green-tinged color. That's what I was thinking about when I chose the colors for this block. 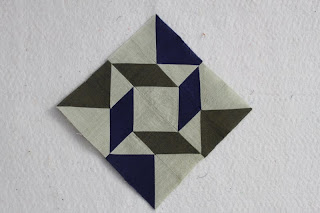 I really like "Windblown Square." Either on point or in a straight setting, the center part of this block has a lot of movement that is really great. And the best part is that it's all half-square triangles, so even though the block has a more complicated look to it, the construction is actually pretty simple. 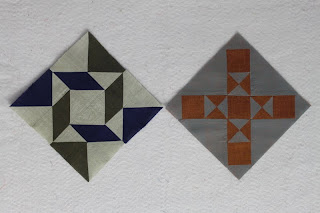 And my progress so far: 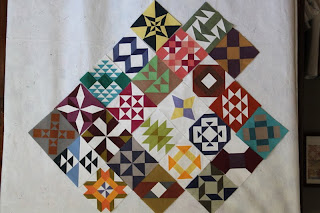 Head on over to Carla's blog to read her thoughts on this week's letter and see her version of these two blocks.
Posted by Live a Colorful Life at 8/26/2011

Love hearing more of the story behind this week's blocks. Seems like the joy of daily tasks really is in a farmer's blood. Love your blocks, especially the star pattern in that cats & mice block, and the movement of the windblown square. Cool effects in the contrasts created with the fabrics you're using.

Love your blocks and I love that you think about the color matching the block. I need to be more thoughtful like that on my blocks. You do such beautiful work and thanks
Cindy

your blocks this week are fantastic!!

I know about those green skies, having lived in the midwest for a while. They are so interesting in a glowy, creepy, wierd, fascinating sort of way. Good color choice for the blocks!

Your blocks look so fabulous together!!
I think I need to convince my husband to become a farmer - it does sound idyllic!

Those blocks look so amazing together!

Your blocks for this week look great. I like the way all of your blocks look together.

I really don't care for pea soup green skies, myself. When the skies turn green, we become more watchful!

But I do find your blocks to be stunning, as every Friday.

I finally checked email and blogs tonight, and could not believe I forgot about FWF! First week of work and school was a bit rough! But, we will get there day by day.

FWF is a nice treat at the end of the day.

its really nice to hear your grandmothers journal along with the blocks. Nice colour choices too.

I really like windblown square, too. You have such a knack for color selection!

Well, They are so interesting in a attractive, creepy, weird, fascinating sort of way. Good color choice for the blocks. It is perfect work you done.

Beautiful blocks! The orange is fantastic!!

I had a long story behind my first quilt work, I will sure to share at my personal blog. Interesting to hearing more of the story behind this week's blocks.