We were at Pismo Beach all weekend. 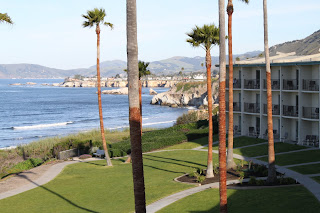 The men's chorus that Mark sings in had a concert in Arroyo Grande, just a few miles down the road from us. It was a great concert and raised a lot of money for Third World relief. He is kind of the "producer" of the concert--setting up the stage and then getting 130+ men on and off the stage, etc. After the concert we decided to treat ourselves to a nice dinner at our favorite restaurant in Pismo.

Are you a Zac Brown fan? 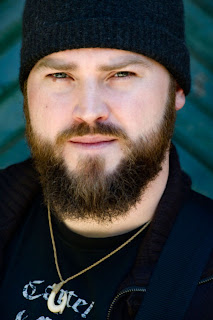 Mark and I shared part of our meal with him the other night. 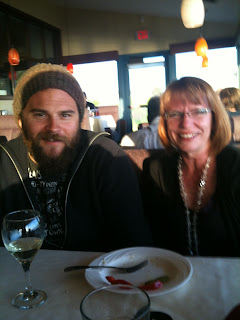 Okay, it wasn't actually Zac Brown. But it definitely was his doppelganger (I had to text my son, Aaron, to make sure of that word...) Seriously.  Down to the beard and the brown knitted stocking cap!  Zac, I mean Andrew and his really cute girlfriend Ashley, were sitting in the booth behind us. I kept telling Mark that I was sure it was Zac Brown, until finally Mark turned around and said, "My wife thinks you look just like Zac Brown. So do people say that to you a lot?" After a back and forth conversation, we invited them to join us for dessert. Turns out that Andrew is also a musician. And his grandmother is a quilter! We had a great time visiting with a "celebrity."

I was trying to get to know my Canon camera better, so I took a few lots of pictures of the sun as it went down on Sunday night. I won't bore you with them all. Unless you really want to see 36 sunset pictures, in which case you can email me. hehe 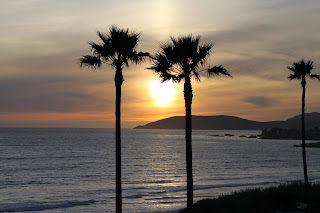 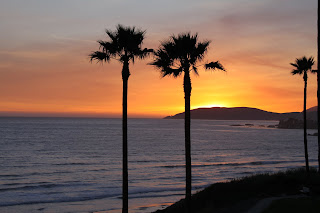 On Monday, we went to Birch Fabrics, to see Cynthia Mann of fabricworm. Cynthia probably wouldn't consider herself famous, but when it comes to online fabric shopping, she has a huge presence. I had met her in person before at Birch Fabrics' first location. She quickly outgrew that space and now has a really nice place in the older part of Paso Robles. Unfortunately, she didn't make it to the store until after we left because her 3-year-old had gotten sick. But that didn't stop me from buying some fabric (super cute new line from Cosmo Cricket) and saving on shipping cost!. 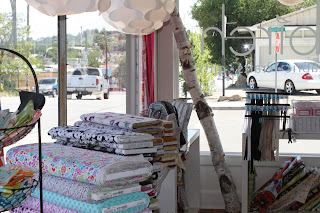 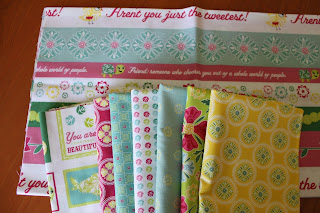 On the way home, we stopped for lunch at Jack Ranch Diner, a place we had always wanted to stop but never drove by at mealtime.  There is a monument here where the actor, James Dean, died in an accident in 1955. 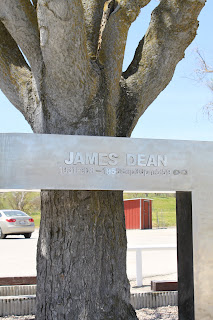 When I looked out in our backyard when we arrived home, this is what I saw (oops, looks like we need to spray again for aphids...) 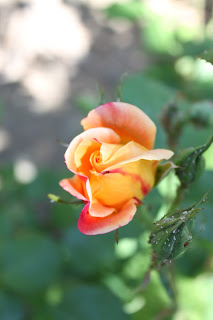 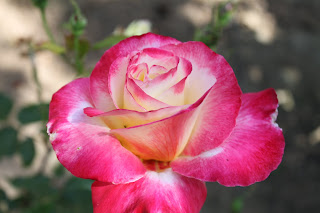 We get rid of our aphids by spraying the roses with a water/dishsoap solution and then rinsing with the hose.

What a great weekend! Love that sweet new Cosmo fabric. I didn't realize that Fabricworm was there!

What a fun trip! We love the Pismo area and it looks like the weather did not disappoint.

I will have to look up Birch Fabrics. We were in Paso just about a week ago and I didn't even know the shop was there. I know that the last quilt shop there closed down. Where is Birch Fabrics?

So sorry that it really wasn't Zac Brown for your sake, but fun nonetheless.

Your weekend was nothing compared to mine! Ha! ;)

Great job on the sunset pics!

I'm happy you are home! I love the new fabric especially the one with the friendship sentiment. How true! And happy you had a fun weekend. Miss Luella

Sounds like you had a wonderful trip. So tell me, was the food any good at Jack Ranch Diner? I've always been curious as we've passed to so many times heading to the coast.

Not sure who Zac Brown is, probably something else I'm missing because I don't have Cable TV! But, I sure know who Fabricworm is...and they know me (hah!)
Glad you had a fun weekend and that the concert was so successful!

What an exciting adventure and amazing pictures. I love the Zac Brown band.

I don't know who Zac Brown is, but your weekend sounds fun. I adore those palm tree photos!! They make me feel especially warm, which I could use these days since it's only 30 degrees here and raining/snowing/hailing.

Love your fabric purchases. How cool to see Fabricworm in person.

What a treat to come home to those beautiful roses! Lovely.

Hooray for you getting your camera out and putting it through the paces!!!! The sunset pictures you posted look beautiful. Keep it up!