The writer this week is from Cascade County, Montana, and she would definitely wish her two young daughters, not yet of marriageable age, to marry farmers "...because the country home life is more nearly complete in itself, and therefore productive of real happiness...The city draws from the home, not toward it."

She enjoys the social gatherings at the school or community hall.

I haven't done this before--adding some personal thoughts this week. I didn't grow up on a farm. I was raised in the city. I was born in Los Angeles. My father was a minister and when I was about 2 1/2 we moved to Enid, Oklahoma, a good-sized town at that time. From there, when I was in fifth grade, we moved to Phoenix, and then right before my junior year in high school we moved to Seattle.

I married someone who was raised on a farm, and he didn't move to the "city," Butterfield, Minnesota, a metroprolis of 600+, until the summer before his junior year. As much as I loved Seattle, my high school graduating class was larger than the town of Butterfield, and I longed for a smaller college. We both went to a small college in Kansas, where we met. We spent the first five years of our married life in Scott City, Kansas, a farming community in western Kansas. It had a population of about 5,000. I cried.

But what I remember are some of the social gatherings. Mark was a P.E. teacher in the only grade school in town, but he also traveled to three very rural schools each week. We often attended pancake suppers in those rural schools and I remember the sense of "community" that thrived there. 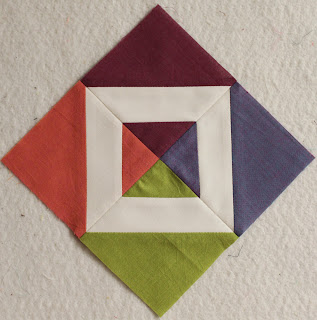 I mentioned the fact that my father was a minister. We were fairly conservative in our social beliefs, and dancing was something that I wasn't allowed to do. I remember in grade school resenting the fact that I couldn't dance, because I could never really explain to my friends the reasoning behind it. However, for some reason, square dancing was not forbidden, probably because there was so much movement involved that you were never with one person for very long before you were moving on to the next partner. 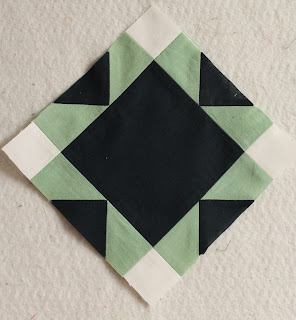 I vowed that our children would be able to go to school dances. And then we had a son who wasn't really interested. When senior prom time came around, we told him that missing it was not an option. You know, I still think about the fact that I never got a chance to shop for a prom dress of my own. 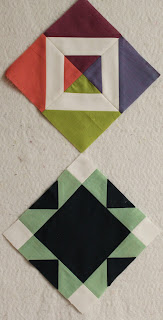 I couldn't get all the blocks into one picture. 46! Can you believe it?? 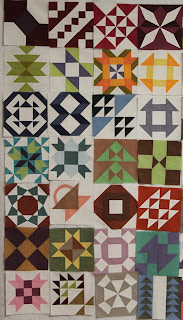 I really need to start working on next week's blocks--four of them--and each one looks like it will take a bit of time.

The winner of my charm pack giveway celebrating 500 blog posts (still can't believe I wrote that much. Really if you met me, you wouldn't believe it either--I'm not a chatty person...) is #23. 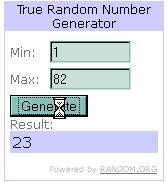 Carla, the winner, didn't tell me whether she lived in the city or the country, or whether she wanted to move somewhere else, but she did say this very appropriate comment for Farmer's Wife Friday:

I like the farmers wife blocks. I just posted my first blocks today! Thanks for the inspiration.

Speaking of Carla, but a different Carla, go check out her thoughts on this week's farmer's wife, and I know her blocks will be lots of fun as well.

I can't believe your blocks are the same as Carla's! They look totally different, and I like them very much. It's daring to use as much black as you have, but it's wonderful. That space will be a great for some showcase quilting. Your upbringing is interesting to read about. You've had lots of life experiences in various locations. I'm sure that makes you the well-rounded person you are... and I sure don't mean that in a physical way! (ggg)

You are making remarkable progress on this quilt! I think you are one of only a few who are really sticking with it!

I love all your Farmer's Wife blocks, but there is something special about this Friendship block! I am glad you shared some of your personal thoughts today. It is interesting to learn more about our friends.

I'm getting caught up with my blog reading today...so I'm a little behind in saying congrats to 500 posts!!! Awesome.....now to go read some of those that I missed ;-)

THese look awesome. This is going to be a beautiful quilt.

I grew up in a small farming community too and I know what you mean about the "bond" of the townsfolk. Your blocks look wonderful.

I think these blocks are among my favorites so far!!!
I grew up in the city and now live in the country. (Sometimes I want to cry because of things I miss, but when I drive and there is no traffic I am so happy!)

The blocks are looking great! They're coming right along. I miss the small-town community too. My grandma just lost her son and it's nice to see how the community rallies around to support her. Free groceries at the store, people sending her cards and stopping by the house, and the ladies at the pharmacy taking good care of her. That's something you don't get in a big city, that's for sure!

Your new blocks are as lovely as the rest Cindy. I'm sorry you were not allowed to dance.

More great blocks! Sorry you never got to shop for a prom dress and weren't allowed to dance...

Of all the blocks you've done, these are some of my favorites. I really love your use of shot cottons.

More beauties, and thank you for sharing! It's hard to decide which I love more, yours or Mrs Snooks'!

I things your first block is just fantastic. I'd totally use that in a full quilt. You're making great progress - I love watching this quilt grow each week :)

Looking great! I loved learning a bit more about you :)
I think you should go get a dress now and do a little dance ;) xx

Once again I love the colors you've got going here. I'd actually love to see a whole quilt with that friendship block. How cool?

Thanks for sharing a bit about your life and I love block 39!

Your blocks are fabulous!

Loved loved loved this post. My mother never had her own wedding dress, for complicated reasons (she borrowed a cousin's) and for that reason she was adamant that we all had our own dresses even though there were four of us daughters and we could have shared. So I "get" the fact that your son was going to Prom--no regrets on that item for him!

I owe you a billion comments, but the jet lag has overtaken me, so I'll get to them later this week. I just couldn't wait on this one, however. I really enjoyed reading your stories, as they made the blocks that much more interesting. Congrats on getting these all done!